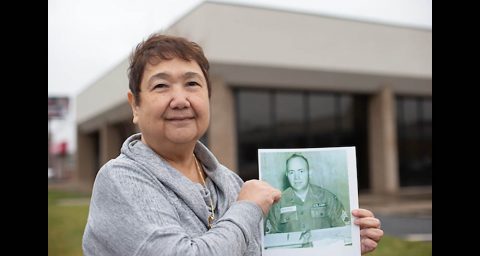 Wilma Newton holds a picture of her father in front of the upcoming military family resource. (APSU)

Once the facility is completed next fall, it will provide seamless support to military-affiliated students as they apply for admission, access financial aid, select their programs of study, register for courses, progress toward graduation and secure employment after graduation.

“These individuals volunteered to serve their country during a time of war and now we are able to serve them. My hope is that this center will help our military-affiliated students find the answers to their unique needs so that they can enjoy the college experience as much as every other student on campus,” stated Brig. Gen. Brower.

In September of 2018, the Austin Peay State University’s Board of Trustees unanimously voted to create the center. A few months later, APSU alumna Wilma Newton (’73) made a generous contribution to the project in honor of her late parents.

Newton, along with her late husband Raymond Vares, previously decided to contribute to the University because of their appreciation for education and their family connection to the military. Newton’s late father, husband, brother and several uncles all served in the military.

Newton’s father, William, met her mother, Sadako, in Japan when he was stationed there as part of the military efforts to reconstruct the country following the end of World War II.

At APSU, about one in four students has a military connection, with more than 2,500 in attendance in each of the last three years. Assistance from staff with specialized knowledge and close attention to detail will help students stay on track with degree planning and maximizing their use of educational benefits.

The center will house existing academic and support programs, which could include Veterans Upward Bound, VetSuccess on Campus, the Military Student Center, the Office of Career Services, Admissions, the Office of the Registrar and Student Financial Aid and Veterans Affairs.