Clarksville, TN – A holiday treat chock full of quick changes, outrageous costumes and funny-bone-tickling delights is returning to the corner of Franklin and First in Historic Downtown Clarksville this season. 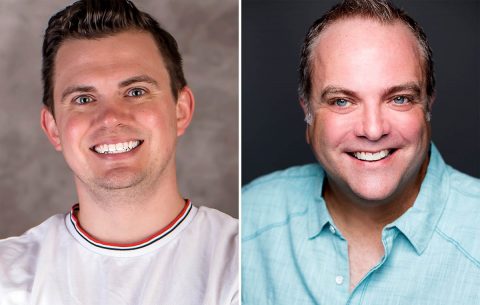 In this hilarious sequel to Greater Tuna, it’s Christmas in the third-smallest town in Texas. Radio station OKK news personalities Thurston Wheelis and Arles Struvie report on various Yuletide activities, including the hot competition in the annual lawn-display contest.

In other news, voracious Joe Bob Lipsey’s production of A Christmas Carol is jeopardized by unpaid electric bills. Many colorful Tuna denizens — some Roxy audiences will recognize from this fall’s production of Greater Tuna and some appearing here for the first time — join in the holiday fun.

The second in a series of comedic plays by Ed Howard, Joe Sears, Jaston Williams — preceded by Greater Tuna and followed by Red, White and Tuna and Tuna Does Vegas — “A Tuna Christmas” is at once an affectionate comment on small-town, Southern life and attitudes, but also a withering satire of the same.

No stranger to the world of one-man, quick-change comedy, Ryan Bowie, executive director of the Roxy Regional Theatre, has previously shown his versatility by playing nearly forty roles in Becky Mode’s Fully Committed, as well as a diverse range of roles in David Sedaris’ The Santaland Diaries, Jonathan Tolins’ Buyer & Cellar and Fred Barton’s Miss Gulch Returns, among others.

Brian Best has had audiences rolling in the aisles ever since his Roxy Regional Theatre debut as housewife Edna Turnblad in Hairspray, delighting theatregoers in myriad roles, including Dr. Scott and the Narrator in Richard O’Brien’s The Rocky Horror Show, Kris Kringle in Meredith Willson’s Miracle on 34th Street and Charles Guiteau in Assassins.

“A Tuna Christmas” is made possible in part by Monica Drake & Mitchell Ketchens and Jill Eichhorn & Barry Kitterman and is presented by special arrangement with Samuel French, Inc., a Concord Theatricals Company.

“A Tuna Christmas” is presented in theotherspace, the 50-seat black-box theatre located upstairs at the Roxy, and plays at 7:00pm on December 2nd, 3rd, 9th, 10th, 16th and 17th. Please note: Due to language and content, this production is recommended for mature audiences only.