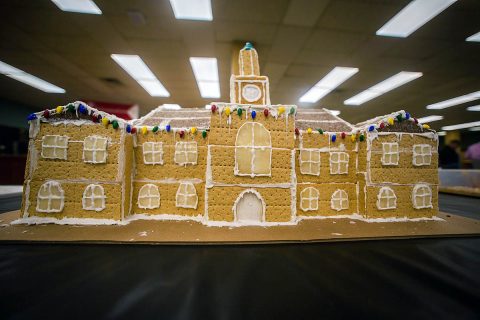 “All entries were delightful and enjoyable to study,” Webb said. “Each judge had a favorite, but we were able to agree on the final decision.”

The prize categories included the judge’s selection of First Place, Second Place and Third Place, while a popular vote determined the People’s Choice winner. The SASI grant allowed for the purchase of Barnes & Noble gift cards for the winners, and Starbucks gift cards for honorable mention recipients.

Entries were displayed on the main floor of the Woodward Library, and more than 200 visitors came through to cast their votes. 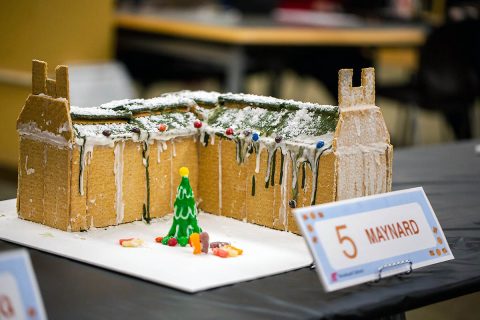 “I was impressed by the creativity and artistic ability of the participants,” Joe Weber, director of library services, said. “The attention to detail was outstanding, and you could actually see which buildings the models were based on, without looking at the title cards.”

Gina Garber, coordinator of digital services, wrote the grant for the event.

“Austin Peay State University’s campus has over 100 years of architectural history, and we thought bringing together that history with a fun, holiday-themed event in the library would be a great way to engage with our students with a SASI grant,” Garber said.

“The SASI grants were created to engage students and faculty outside of the classroom. The SASI grants are valuable! I believe they contribute to keeping students at Austin Peay by giving them an opportunity to create memories and learn more about their majors and future careers. Most importantly, SASI connects our students with our excellent faculty,” stated Garber.

The grant also allowed each entry to receive a “building kit” with graham crackers, royal icing, marshmallows and a variety of candy to help them construct and decorate their building.

First Prize and People’s Choice went to Eden Jeffers, Kylie Birdwell and Olivia Hershey for their recreation of the Browning building. Hershey said their entry took about 12 hours to build.

“The actual construction began Monday evening when we worked for about four hours planning the general design and building the base,” Hershey said. “Then on Tuesday we worked from about 6 p.m. to 2 a.m. finishing the construction and decorating.”

Hershey, Jeffers and Birdwell all found the roof to be the most challenging part.

“Cutting the graham crackers to size and figuring out their placement was difficult enough, but when the time came to actually add icing, there was a bit of a challenge to keep everything in place,” Hershey said. “We had gravity working against us.” 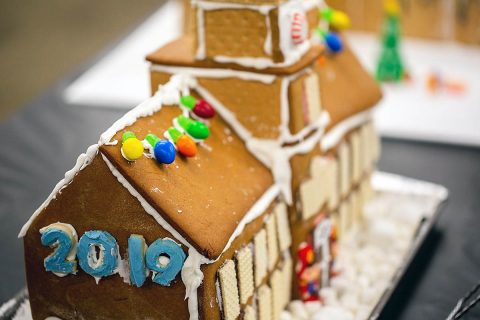 Birdwell’s favorite part of the process was setting it on the table in the library. Hershey added, “I know that we were all relieved it held up through the night and there weren’t any casualties as we brought it across campus.”

Even though it was a lot of work, the winners found it a rewarding experience.

“Even toward the end when we were tired and covered in icing and graham cracker dust, we were laughing and having a good time,” said Hershey.

Second Place went to Adella Smith for her recreation of the Ellington building.

Smith said she chose Ellington because “not many students would choose that one and I wanted to be a little different.” The building took her about five hours to make. “The part I enjoyed the most was the decorating. I was able to put some creativity into making it, while also making it look like the APSU building,” Smith said.

“I chose to do the Art + Design building because I am an art major with a concentration in art education,” Smith said. Her design took more than three days to create. She had unique design elements like sugar-glass windows and the “onion rings” art sculpture hanging inside. She said that making the roof and hanging the art sculpture were the most challenging parts of the process.

“I had to make a grid system with pasta noodles in order to cover the roof in graham crackers and hold the sculpture in place,” Smith said.

The buildings remained in the library for several days as part of the Past and Present: On the Grounds of Austin Peay display.

“Thank you to the creative, determined students who contributed to this graham cracker world for the Woodward Library,” Webb added.